The Peabody-Emersons excavated in Deir el-Medina and in the Valley of the Kings during the 1921-22 and 1922-23 seasons. As chronicled in ”The Serpent on the Crown”, in 1921 they were given a small golden statue of what turned out to be the then little-known King Tutankhamun. In a magnificent coincidence found only in fiction, the statue was discovered to be one of a few items stolen from the tomb of the king in antiquity, and buried by the thief in Deir el-Medina, together with a papyrus confessing his deed.

The following year, as chroncled in “Tomb of the Golden Bird”, the Peabody-Emersons are on the scene as Howard Carter discovers and begins the excavation of the tomb of Tutankhamum for his patron Lord Carnarvon. They even witness an improper nocturnal entry into the tomb by Carter and Carnarvon before its official opening, an event which is generally accepted to have occurred. 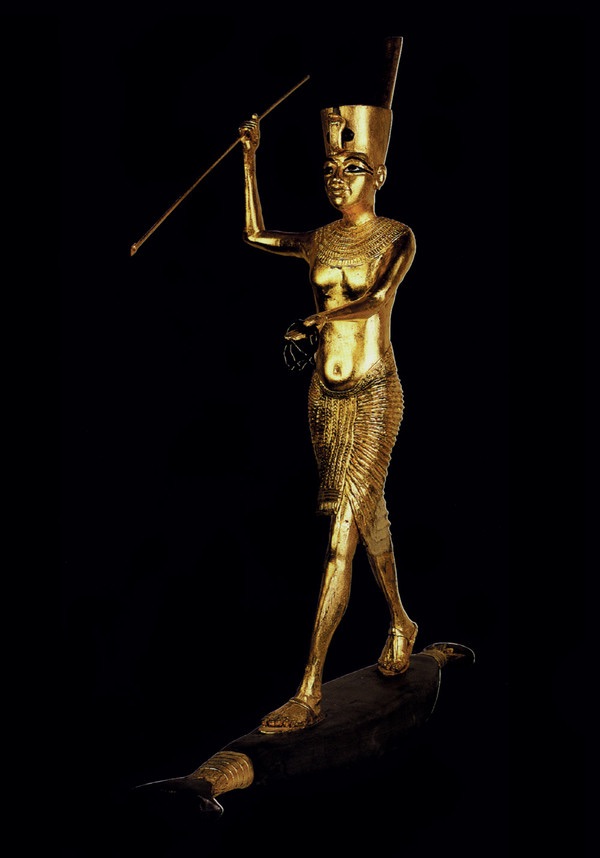 Object name: Gilded Wooden Figure of Tutankhamun on a Skiff, Throwing a Harpoon

Provenance: Found in KV62 by Howard Carter in 1922. Sent to the Cairo Museum.

Additional description: The figure was found missing following the looting and vandalism that happened in the museum on January 28, 2011. It seems to have been broken off by the looters, and all that remains are the king’s feet, right arm, harpoon and the bronze hoop that the king had held in his left hand. ahramonline wrote on April 29, 2014 that 10 artifacts stolen from the museum had been recovered, including “a wooden statue of King Tutankhamun covered in gold sheets”.

Current location with inventory numbers: Was to be restored following its recovery, and placed in a special exhibit at the Cairo Museum for three months from May 2014, before being returned to its original location, Catalogue no. JE 60710.1

Acquisition history: Found in KV62 and taken to Cairo Museum.