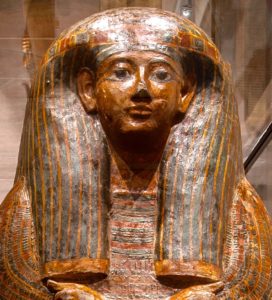 ’I would prefer to go on at Deir el-Medina,” Ramses said…“The site is unique…do you realize what we might learn from it? We’ve come across a cache of papyrus and a number of incribed ostrica; they confirm my belief that the people who lived in village were craftsmen and artists who worked in the royal tombs of the Valley of the Kings.’ (From ’The Golden One’ by Elizabeth Peters)

Butehamun was one of the most famous scribes involved in the building of the royal tombs of the Valley of the Kings, and a member of the most illustrious family of scribes there.

Butehamun presided over the closure of the Valley and the workers’ village of Deir el-Medina,  and the move from building new tombs to the preserving and moving (some would say plundering) of the mummies left behind, marking the transition from the New Kingdom to the Third Intermediate Period, as Egypt splintered into what were essentially two realms.

By studying the primary sources associated with Butehamun, including letters, reburial ‘dockets’, graffiti, the apparently unique decorations on Butehamun’s coffin, and the finds at his excavated house in Medinet Habu, this paper investigates what can be learned about Butehamun and the reburial project.

Some of the sources seem to indicate he experienced some kind of religious crisis, which may have been brought on by feelings of guilt over his treatment of the royal mummies, two of whom were worshipped as gods in Deir el-Medina.

My B.A. thesis in Egyptology from Uppsala University explored these questions: